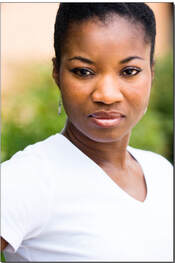 Diedre Dawkins
Diedre Dawkins is a 2003 Bessie Award winner and founder of “Dance is Healing” mentoring for middle school girls through dance. Dawkins graduated from the New York City High School of the Performing Arts and received her BFA in dance from New York University Tisch School of the Arts and her MFA in choreography and performance from The University of Maryland College Park. She is currently pursuing her K-12 Teacher Certification at Towson University. She was a member of Ronald K. Brown /Evidence Dance Company for eight years where she had the privilege of teaching and performing throughout the United States, Senegal West Africa, Switzerland, Greece, France, London, and Cuba. She is a member of the Screen Actors Guild and has worked with artists such as Bill T. Jones (FELA), Bebe Miller, Kevin Iega Jeff (Deeply Rooted Dance Theater), Jawole Zollar (Urban Bush Women) and Amaniyea Payne (Muntu Dance Theater).
For the past three years, Dawkins has been a faculty member of the BFA Dance Program at the Peabody Conservatory of the Johns Hopkins University. She is also the arts director at ConneXions: A Community Based Arts School, where she has been named ConneXions 2016-17 Teacher of the Year. She is the founder and director of ConneXions Repertory Company, which is comprised of ConneXions students and alumni. This fall, the repertory company humbly accepted an invitation to perform at the opening ceremony of the National Museum of African American History and Culture in Washington, D.C. Her accomplishments as a program facilitator/dance director includes statewide dance performance exposure and exceptional audition preparation for students resulting in entry to elite arts institutions throughout the United States.
Dawkins is the modern dance instructor at Alvin Ailey Camp/Towson. She has been an adjunct professor in dance at Towson University and a visiting artist at Howard University. She’s a teaching artist with Young Audiences of Maryland and has worked as a consultant, artistic director, and dance program facilitator for various arts institutions throughout the United States. Dawkins has created a highly successful “Literacy through the Arts Curriculum” for grades pre-k through 8 and was the co-chair of the committee working to revise the dance curriculum for Baltimore City schools. She is the director of Dance is Healing Performing Arts Preparatory where she provides summer dance instruction with a concentration in health and political awareness and is also the founder of the DPAP six-week summer intensive which culminates in a week of dance immersion in New York City. Dawkins has a deep love for children and the art of teaching and as a result youth and the betterment of her community is her life work.