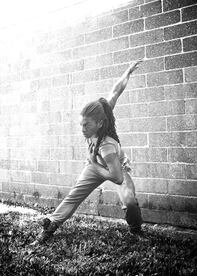 R. Lamont Mitchell
R. Lamont Mitchell holds a Bachelor of Fine Arts degree in Dance Performance and Choreography from New World School of the Arts/University of Florida and a Master of Fine Arts degree in Dance from Florida State University. He began his training at Bethel A.M.E. Church under the mentorship of Beverly Barber, PhD., and former Associate Professor of Dance Studies in the Department of Physical Education at Florida A&M University. He furthered his training on scholarship at the Martha Graham School of Contemporary Dance Summer Intensive. In 2010, he was among 15 student dancers from New World School of the Arts Dance Program chosen to go to the Czech Republic for the International Dance Festival of Prague, where he danced BATTLEFIELD (Robert Battle). The cast of BATTLEFIELD won three awards including the main overall first place award from the festival. He has preformed in the companies of The Tallahassee Ballet, Brazz Dance Theater, and Bethel Liturgical Dance Company. Mr. Mitchell has also had the privilege of working with world-renowned choreographers and Artist performing both classical and contemporary repertoire. Most notably the works of Ronald K. Brown (Evidence/ A dance Company), Jawole Willa Jo Zollar (Urban Bush Women), Augusto Soledade (Brazz Dance Theater), Peter London (Former Principle Dancer with Martha Graham Dance Company), choreographer  & Basie Award winner Darrell Jones.
​
​As a teacher he has mentored and coached many young artist from the Miami-Dade County area (Miami, Fla.), Leon County (Tallahassee, Fla.), St. Louis, MO., and Baltimore. These young dancers have gone on to dance in some of the most prestigious performing arts magnate schools and conservatories, college programs both regional and national. Some of these students have gone on to join prestigious dance companies and other arts organizations. Mr. Mitchell’s approach has been seen as bridging the gap between traditional and twenty-first century pop culture, preparing students to be successful in both the commercial dance and concert dance world.

As a choreographer Mr. Mitchell’s research has been focused on the black male identity as it relates to LGBTQ culture in our society in the twenty-first century. He believes that living in a hyper-masculine male dominated society has impacted both male sensibility and the perception that follows men who may or may not necessarily subscribe to such norms. Informed by his background as a female impersonator and vogue dancer, he has created choreography that utilizes theater components and club dance performance as a vehicle for story telling. Interested in telling these stores, which have a historical and personal significance allows him to create an atmosphere within his work whereby research and scholarship are approached methodically.

By creating a vocabulary that fuses Vogue dance, Ballet, Modern, Afro-Caribbean, and Theater, his choreographic work provides a platform to educate audiences about diversity while also exploring universal themes.